I gave tossing and turning and new meaning.  At 6am I put on boardshorts and walked up the hill, crossed the highway en route to OXXO.  It was still dark, but I needed coffee.  OXXO is 24/7.  AC tambien.  It would be the equivalent of getting coffee at 7-11.  You would never do that right?  I would never do that.  But it’s opposite here.

Four teenagers were behind the counter.  They were all about 16.  Buenos Dias out of all of them.  I doctored up the cafe nice and fancy and walked back to the hotel.  I grabbed a sheet from my room to wrap around me, and walked up to the fourth floor open ramada.  Hight atop the roof, the morning offshores can be chilly to the bare skin.

When day broke, it appeared that the surf had increased a bit.  I had other things to do on this particular Sunday.  Sundays are special here.  At 8am I ran the shoreline to La Punta.  I carried a pocket dictionary with me.  When I got to the point, Big Jim and his two sons were about to paddle out.  I put in plugs and had an ocean swim.

I arrived at Israels at around 9:30am.  I was early.  I was also hungry and thirsty.  Amidst all the nerves and brain play, I had forgotten to bring money.  He offered up a big bowl of granola cereal.  Wolf.  I noticed he had purchased one of those magic marker erase type chalk boards.  The gnats were bugging me.  I could have used a shirt.

What I could have used most though was a lesson plan.  I would have, had I known which grade I was teaching and/or how many students were going to show. Gilbron showed a half hour early.  I couldn’t understand one single word he said.  It was a modified Spanish.  He just spoke in one long word.  He brought pencil and paper.

The gnats turned to flies.  The flies got all buttery.  By the time Jehu and Orielle arrived, I was a wreck.  They all had pencils.  They all had paper.  They ranged from 5-12 years of age.  Some knew the alphabet in Spanish and some didn’t.  I had no idea what I was going to do.  The 5 year old came with his mom named Kitty.  Hola Gata. 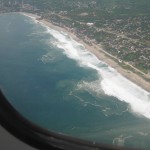 Viciously nestled in between shifting Mushroom Rips, are Giant Rogue Waves.  From 1000 feet above sea, this is what it can look like.  They call this spot The Mexican Pipeline.  It can only be seen, heard, and felt in Puerto Escondido, Oax. 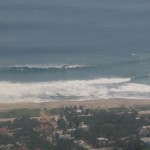