My old friend Cy, who sometimes posts up in my Attic, had the Nerve to start in on me once again.  At times he can be a real pain.  Instead of dealing with him au natural, I decided to try a different R(x)ecipe.  I had heard time and time again that the drug stores in PE can be much more liberal with their products and services, if you know what I mean.  And there are as many pharmacies in this town as there are places to get your haircut.  And let me tell you, there are more freaking places to get a haircut in this town than there are fish in the sea.  So, sans shoes or shirt, I walked into this random ‘hole in the wall’ pharmacy to see what I could get my hands on.  In Spanish, I asked the young man if I needed a doc to write me up an Rx for one pain pill.  Just one I said.  He closed out his Facebook account, turned the Eminem volume down a bit, and asked me what hurt.  I told him my back was killing me.  He said that all he had in stock was 50mg tablets of Tramadol.  No Way, you’ve got Tramadol?!?!  I told him that Tramadol was my preferred Rx, especially with a couple of beers, and double especially after a good win on Sunday.  He didn’t get that part, but half-laughed anyway.  Again, I told him that I would be happy to come back with a written script from Dr. Pepper knowing DP would write up an Rx for any reason.  The pharmacist told me not to sweat the note, and handed me ten tablets for 70 pesos.($6)  I reached into my bathing suit and could only come up with 41 pesos.  A bit tight in the cash department I thought to myself.  Hunching my credit would be gold, I still continued with my audition and I told the man that I would return later.  He told me I could pay the balance manana.  And Bingo was my Gringo.

Dawn patrol on my doorstep.  It let out a diminished meow.  1000 thoughts rushed into my head.  I lifted it by the scruff and it shut its eyes.  8 weeks and male I supposed.  I had a kitten on my hands.

I crushed up two stale tortilla chips and added sunflower seeds.  It chowed like I imagined.  It then spit-shined itself up real diligently.  Confident I thought.  I will call you Junior, pronounced ‘HoonYour’.

Moral to Story:  When an unrealized pet makes it transparent that it has chosen you, turning a cheek is ill advised.  Statistically speaking, these animals have significantly more to offer you, than you might it. 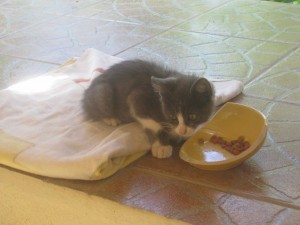 I was sitting down alone at the Split Coconut, trying like mad to mind my own god damned business.  But loudmouth, sitting (ohhhh, say) 10 feet away or thereabouts, was well on his way to irritating the fuck out of me.  Thankfully I had been drinking.

“Well Dylan wrote that song because…and this one guitar player in my first touring band just wasn’t getting it…I’ll take old Canadian Blues any day over that new shit from the states…so I finally had to tell Liberace that it’s a guitar song, not a piano song.”

The hot sun was setting over the warm sea.  The boldest cloud in the sky took after Motzart.  The whole moment had me in a trance.  Right then i overheard Jackass tell the server that he didn’t want avo on his burger because avo isn’t good for you.

That’s it!  I slammed my thrid and finul beer.  I stood up, did a couple of full neck rotations in both directions, a few light back bends, cracked some knuckles, put the mean mask on, and walked over to his plastic table in the sand.  And This Is How She Blew:

Yo:  What’s up Jimi?  Hey i tried my absolute best to under-hear most of the cocky nonsense that was spewing out of your Canadian pie chute, but couldn’t.  You are Canadian right?  Wait, let me guess… you’re some hot shot blues guitar player from the Toronto scene?

El: Who the fuck are you asshole?

Yo:  Yeah, I’m just the guy your inflated guitar hero ego hates to be around.  Stroking that string instrument like it’s your tiny dick.  I’m so sick of guys like you.  You ain’t no fucking artist.  Your a musical widget!  Dime a Dozen!  Now get over yourself!!

El:  What the fuck are you talking about?

Yo:  I don’t care how good you are, or how much you know, or how much stupid equipment you got, or how many loop pedals you push down on stage, or who you know, or where you’ve toured.  I don’t care where or how you plug in, and I don’t care about your Les Paul or your Kirk Gibson or any of your other closed minded musical spew.  And i don’t give a fuck if you got more talent in one of your fat fucking fingers with your eyes closed than i will ever have!

Yo:  And furthermore Susan, i wouldn’t be the least bit surprised if you will never be as indie or as slick as me, because my shit is the truth, and it’s from the heart.  And if I want to play Little Feat or James Taylor on the keys to an audience of nobody, then you better give up your seat, because it’s standing room only for you, and it’s coming in hotter than any of that 1-4-5 crap you put out.

El:  Hey dude, I don’t know who you are, or what you’re on, but I suggest you take a hike before you get yourself into more trouble than you can handle.

Buenos Dias lasts until about 10 in the morning.  It seems that Buenos Dias begins and ends when the roosters say so. Then comes Buenas Tardes.  Buenas Tardes sticks around longer than you think it should.  There really isn’t a time limit on Buenas Tardes, but typically around dark is when Buenas Noches gets fired up.  Though there are sure to be some that might not begin using Buenas Noches until around midnight.

That is why I stick to Buena-uh-huh.  It can work anytime anywhere.  To ensure its effect, it should be confidently mumbled .  [Hold that Thought]  If it’s 8am and clearly a Buenos Dias moment, as an elderly man or woman is coming my way, then of course I greet them with a proper Buenos Dias.  But 19 out of other 20 times that I become aligned with the need to personally salute another, it’s Buena-uh-huh out of this guy.

a hunger to prevail near remote waters

is but the sundae, topping out the cherry

adhering to the writings in the sand

authors its affect on the more fortunate

once fading creations with pumping souls

now fastened to the dream of one leader

the only strings that stay attached

become the fire whose aim is art

it’s a democracy so few live to experience

this soiled pilgrimage back to mother earth

often used as a definition for accord

what emerges from this obligation

is natural law worth documenting

the advance that is sure to exist

will all but make feelings taste

the engagement that comes to pass

is sure to bring fear to the vicinity

is to mask the paramount omens

and abandon ones personal rainbow 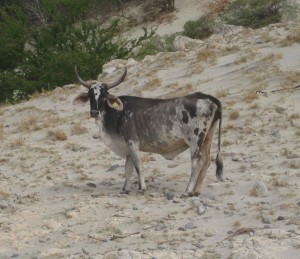 The old black haired dog slowly made its way to where i was sitting.  His eyes had a twist of glaze.  Despite my complete captivation with the canine, my first thought was that I hoped he would walk on by, scratch at the hot dirt under the shade tree, and nestle down into a cold hole.  Basically my way of telling myself that I didn’t want to pet the old beast.

I really figured it didn’t want to be pet either.  Not because dogs don’t love being pet, rather this was a real old dog probably looking for peace and quiet.  Where is it more safe and quiet for a canine than the inside of an unearthed hole that has just been personally dug?  A small racetrack of fleas and such were swarming around his white muzzle.

When Blackie got to me, it stopped and looked right through me.  In turn, I was able to see my calling within the glaze.  I put one index finger directly under his eardrum, and made slow motion, circular movements.  He froze and smiled.  When i stopped, it went downward dog on itself, before stretching out both hind legs independently.

It didn’t want any more or it would have made it known.  In my best baritone, I told it that I got why it decided to stop at my foot.  During our talk, some dog action erupted nearby.  The old black dog naturally opened its mouth to bark.  Little came out.  Again, it looked right at me.  He seemed relieved that natural instinct wasn’t able to get the better of him.