I would say she is in her mid to late 30’s.  My best guess is that she is from Spain.  Maybe Morocco.  Could be from anywhere actually.  It’s tough to know sometimes.  Puerto is Oh-So-International.  I suppose I could ask, but I never understood why anyone would need to know where somebody is from?  She’s probably from Venus.  How’s that?

One thing is for sure, this young lady is a professional musician.  A bit of a Diva around these tropical necks.  She’s pretty committed to her art.  I had heard that she can instantly play by ear, PLUS read music.  She plays a variety of different instruments.  She writes and sings in three languages.  She can sit in with anyone, anywhere, anytime.

On Thanksgiving afternoon, while I was busy doing absolutely nothing, I heard someone using what sounded like my Mexican doorbell.  So I stopped what I wasn’t doing, went to my tinted window, and looked down to the street below.  No frigin’ way!  The Diva was whistling up like Juliet might have done back in the day.  I was blown away.

“Hi.  Was that you playing piano real early yesterday morning?  I heard it from way down on the beach.  The offshores must have been carrying the sound.  It sounded like Still The Same by Bob Seger & The Silver Bullet Band.  Am I right?  That’s one of my all-time favorite songs.  Might you be interested in playing together sometime soon?”

Well I uh..well you know things are uh, you know I’m not too sure that uh, i don’t really normally, it’s sort of tough to, i kinda hafta take that thing to the place, and you know my piano weighs a ton, and right now the internet is uh, ehh why don’t I text you when my schedule opens up.  What I’m trying to say, is that I probably ain’t your guy.

She wondered if I could make tonight work, but I knew I needed more time to outthink this project.  We agreed to meet the following Monday.  She asked if it could be at 10pm.  I’m thinking..who comes over to someone’s house at 10pm?  I told her that she would have to wake me up, but that Yes, we could meet at 10pm.  To Be Continued…

I was sitting down alone at the Split Coconut, trying like mad to mind my own god damned business.  But loudmouth, sitting (ohhhh, say) 10 feet away or thereabouts, was well on his way to irritating the fuck out of me.  Thankfully I had been drinking.

“Well Dylan wrote that song because…and this one guitar player in my first touring band just wasn’t getting it…I’ll take old Canadian Blues any day over that new shit from the states…so I finally had to tell Liberace that it’s a guitar song, not a piano song.”

The hot sun was setting over the warm sea.  The boldest cloud in the sky took after Motzart.  The whole moment had me in a trance.  Right then i overheard Jackass tell the server that he didn’t want avo on his burger because avo isn’t good for you.

That’s it!  I slammed my thrid and finul beer.  I stood up, did a couple of full neck rotations in both directions, a few light back bends, cracked some knuckles, put the mean mask on, and walked over to his plastic table in the sand.  And This Is How She Blew:

Yo:  What’s up Jimi?  Hey i tried my absolute best to under-hear most of the cocky nonsense that was spewing out of your Canadian pie chute, but couldn’t.  You are Canadian right?  Wait, let me guess… you’re some hot shot blues guitar player from the Toronto scene?

El: Who the fuck are you asshole?

Yo:  Yeah, I’m just the guy your inflated guitar hero ego hates to be around.  Stroking that string instrument like it’s your tiny dick.  I’m so sick of guys like you.  You ain’t no fucking artist.  Your a musical widget!  Dime a Dozen!  Now get over yourself!!

El:  What the fuck are you talking about?

Yo:  I don’t care how good you are, or how much you know, or how much stupid equipment you got, or how many loop pedals you push down on stage, or who you know, or where you’ve toured.  I don’t care where or how you plug in, and I don’t care about your Les Paul or your Kirk Gibson or any of your other closed minded musical spew.  And i don’t give a fuck if you got more talent in one of your fat fucking fingers with your eyes closed than i will ever have!

Yo:  And furthermore Susan, i wouldn’t be the least bit surprised if you will never be as indie or as slick as me, because my shit is the truth, and it’s from the heart.  And if I want to play Little Feat or James Taylor on the keys to an audience of nobody, then you better give up your seat, because it’s standing room only for you, and it’s coming in hotter than any of that 1-4-5 crap you put out.

El:  Hey dude, I don’t know who you are, or what you’re on, but I suggest you take a hike before you get yourself into more trouble than you can handle.

i came across the humble man that is respectfully known for consistently shaping and glassing the best surfboards here in puerto escondido.  he was retrieving mangos off his tree with an extension pole connected to a metal bucket.  i had never met him, but i knew who he was.  in person, i was surprised how much he resembled the decal he uses on his boards.  before asking for my name, he asked if i wanted some organic mangos.

we talked about earth, wind, fire, and of course surfing.  i told him that i am new to town again, and that he and i were going to be neighbors for the next six months.  his beautiful daughter came out in the street to watch her daddy be nice and gentle to a “middle-aged man pretending to be a kid.”  i mentioned that i am saving up all my pesos in my very own piggybank so that one day, when i grow up, i can buy one of his boards.

he handed me four mangos.  he told me that the milk like substance oozing out of the skin can potentially wreak havoc if it got on my skin.  i told the nice man that i am indestructible, despite my left foot being swollen 2x the size of my right one.  i noticed his daughter was wearing a pink shirt, and on it was Mickey Mouse playing the piano.  “No se que Mickey Mouse toca el piano?” I said.  she squirmed and looked at Pa.

her father said that his daughter really wants to learn how to play a musical instrument, and all indications seem to be pointing towards the piano.  “the ‘pro-lame’ Aron, there isn’t really anybody in town that has a piano, and certainly nobody that is willing to teach her to play,” said the talented surfboard shaper.  that sucks i thought.  i thanked the man, ‘pounded him out’, and rode my bike without brakes down the steep hill.

I was resting inside my darkened room.  It was the dead middle of a hot day.  To my surprise, Elise appeared at my sliding glass door.  Her reason?  She said she just hadn’t seen me in a while.  She was in a skimpy bathing suit, and appeared intent on staying a bit.  I quickly  overhauled the bathroom.

She saw my setup.  She apparently had no idea that I am a Piano Man.  I explained to her that I drink alone.  I offered her up an ice cold beer.  I played Going to California, Wild Horses, and a few others.  She had the Madonna thing going with her two front teeth.  She asked if I knew any Beatles.

I cranked up my wheelhouse.  I played her Something that I just learned Yesterday.  We sang Carry that Weight and Glass Onion as a duo.  She stepped outside for a cigarette.  I desperately needed a cold shower.  She left a personal belonging behind.  One of the oldest tricks in the book.

For such a small port town in Southern Mexico, there sure are a lot of music shops.  I am not talking about Guitar Center type of music shops or anything even remotely close.  The music shops around here are more Sound Shops.  Sure these shops have a guitar or two on the shelf, maybe a drum set, a few cheap keyboards, cables, microphones etc..  But the bread and butter for all these shops is PA systems, loudspeakers, and loads of booming speakers.  It’s big business.  You see, there are no noise ordinances down here.  If you want to draw people into your shoe store, or restaurant, or OBGYN clinic, you Pump the Volume through booming speakers right on the sidewalk.  If you have something to sell like Tortillas, Fruits and Veggies, Widgets, or even the car you are driving, then your drive that car around town with a megaphone or a recorded loudspeaker roped down on the roof, and you Pump UP the Volume.  Throwing a party for your 13 year olds Communion, you PUMP UP the VOLUME.  Wedding Night for Hector and Isabella?  PUMP UP THE VOLUME!! 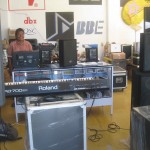 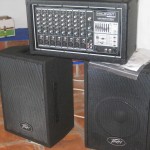 Anytime of Day or Night, Anytime is Quite Allright

I wrote a new song called Come on In.

The words came to me long before the melody.

Once my agent heard the melody, he signed off on it.

And once the musicality was approved, I was quick to record it.

We sat in my white van parked right across the street from the airport runway.  We ate In n’ Out and watched the planes land.  I was nervous.  Bones kept face down on her burger to hide the tears.  I made sure for the 100th time that she wouldn’t forget to start my van from time to time.  I took a pill.

At 5:15pm, I pulled up to International Departures.  For the first time ever, I used the curbside baggage handler.  It wasn’t so much that I had a lot of baggage, rather what I had.  I had four pieces all said.  My carry on and three others.  We said our goodbyes and made it quick.  She drove away.

They wanted $50 for the longboard.  $50 for the piano.  And $20 for the suitcase, providing I could remove two pounds worth of stuff to make weight.  I took out Lily, Rosemary, and the Jack of Hearts.  I gave the curbside handler a ten spot.  He smiled, called me Sir, and carted my lifeline down the way.

I happened to notice my keyboard was face down on the side w/ masking tape that said This Side Up.  The pill was kicking in which musically shifted any anger or anxiety into the All Good mode.  When the piano arrived in Puerto, there was no masking tape left.  Could have used another pill.