Emotions are NOT facts.  Abraham Lincoln said that.  Just kidding.  I’m not sure who coined it.  It might come from my book of Tao.  Just kidding.  It actually does come from The Book of Tao, just not My book of Tao.  I don’t have a Book of Tao.  My book is Cannery Row.  I’ve been on page 18 for coming up on three months.  The story takes place in Monterey, CA.  It takes place back in the day.  It’s about a Row of Canneries.  And some drunks.  Loose women too.  It’s fiction imitating fact.  My kind of story.

My emotions had been set to overdrive much earlier on than I had anticipated this time around.  Unrealistically, I was banking on a gradual beeline towards emotional tolerance to life here in the Mexican Tropics.  That I would slowly find myself at least half grasping the ways in which ‘life gets done’ around here.  But here we are, November 14, 2012, and although I can envision an A+ book report on this very subject, I’m a bit short on words.  I’ve been too busy laying on my cheap mattress, throwing a Penn 2 against concrete walls with my right hand, and catching it with my left.  And vice-versa.  There’s a metal ceiling fan to negotiate.  The daily earthquake.  Maybe a few breakables, but maybe not.  When I first started utilizing my concrete hideout as an athletic arena to keep my hand eye sharp, I hadn’t considered that it someday would also serve as a platform to aid massive writers block.  A little trick I learned from my man Jack Torrance.

I suppose there is an ‘underbelly’, or an ‘undertow’ to this tropical paradise that slowly creates an unconscious shift that begins to play tricks with the mind at large;  A reality check, doing business as a Poor-Man’s Circus.  All one has to do to participate in this mayhem is observe its Sights, Sounds, its Smells, and of course all the bloody Stories that seem to tag along.  It’s sensory overload in full affect.  It’s affect without cause, if that’s even possible.  If that’s not possible, then there you have it.

As overtly enchanted as Puerto Escondido is, and as unconstitutionally wonderful the people of this region appear to be, it’s time for me to come forward with the current state of my emotions.  I will begin with a generalization or two:  Puerto Escondido is not Laguna Niguel disguised as Nuevo Vallarta.  I’m pretty far SE of those western ways.  I’m out-manned and under-gunned.  An anomaly.  My way or the highway puts me on the highway facing oncoming traffic.  Their way can appear confusing.  Full smoke and mirrors.  Land of the Double-Take.

So Yeah..It would be easy enough to write 1000 words about The Midget with the Machete and his Red Nike Hat who always smiles bright and gives me The Small Hand Shaka.  I could write a book describing how I’m affected by the In Your Face, Front & Center, Free to Be, Up Close & Personal Canine Hierarchy establishing and reestablishing, and re-establishing itself in and around everywhere you look or turn.  Perhaps I should shed some light on The 24/7 Mega-Loudspeaker Guy, with his prerecorded jabberwocky, that drives his motorized three-wheeler up and down the highway with the spoiled muffler.  Speaking of Highways, I will forever be a changed man when I came across the stiffened dog covered in white lye under the baby palm in the highway divider.  And don’t let me forget about my happenstance with The Harmless Drunk Guy that tried like mad to sell me a rare green iguana for a pint of Mezcal.  Actually, it would have been a sweet steal for me had this beauty been alive.  I kept saying, “It’s fucking dead Amigo!” 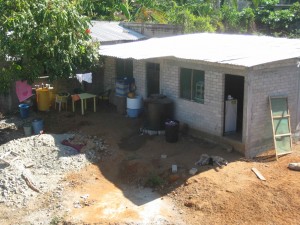