Two times during this warm, humid evening, I walked outside and hosed off.  I wasn’t alone.  I knew Mr. Gomez was out there somewhere.  Apparently so were every other creepy crawler of the night.  The sounds and the rattles combined with the eyes of the Fire Flies kept me extra close to the palapa.  The water out of the hose felt sweet.  I knew it would buy me some extra sleep.  It was raining good.  Daylight came at 7am.

Through the binoculars, the surf had picked up significantly.  Big Corduroys as far as my eye could see.  At 11am the tennis court was still wet. I put on zinc.  I also put on a new, white, long sleeve, 55+ SPF special lycra.  It was high noon in the Mexican Tropics.  I grabbed my board and ran down the overgrown path towards Wild Bills.  I had heard Ramz was in town, and apparently nobody knows *$*$*$* like Ramz.

I was prepared to go out there alone.  Gads.  Had surfed it 2x before with Big Jim a few years back.  Scouted it a bunch last winter during futbol rehab.  Don’t get me wrong, I would have loved to operate within the Buddy System, but a decision had been made, and unless Ramz was home, and wanted to surf, I would go where no man  was going to be going on this unassuming scorcher of a day.

I jogged down just as they drove up.  Father and Son heading to Puerto.  I’m sure I caught them by surprise.  We all shook hands.  They stayed in the truck. I knew right then and there that I would be surfing alone.  “It’s pretty good size Amigo.  The tide should still let you out through the rocks, or you can enter from the steep section of beach just passed the arroyo.” They drove off.  I walked away.  I forget which prayers I used.

As per our arrangement, I was going to vacate the premises at Casa Agua Azul during the Quicksilver Pro.  Was glad to.  It’s a scene man.  The contest director, Gary Linden, stayed in my room.  I bought a few extra nights in town so that I could watch the first couple two three rounds, but then had plans to leave town and head South to Santa Elena.  That could only mean one thing.  I needed shoes.

One guy I know laughed at the thought of finding my size here in Puerto Escondido.  Another dude I know said, “Make sure you don’t get shoes with too much glue, AND always carry glue.”  Anonymous said he always buys his shoes in Oaxaca. Somebody else suggested I ask Confucius because he goes through his share of tennis shoes.  I knew it was going to be like this, but was in it to win it.

I hopped a Collectivo.  The prices had gone up 1 peso since I was here this past winter.  It’s now 5 pesos to get collected.  I took it all the way to The Mercado.  I had heard that there are a lot of Zapaterias up by The Mercado.  There were.  There are.  Tons of em’.  Every four or five shops sells shoes.  I was barefoot and without a shirt.  I had 400P in my pocket.  It was on.  I polished off a 32oz Jamaica.  10P.

So here’s how it goes down in the shops.  What you see on the wall is what they have.  There ain’t nothin’ in back.  So I would go to the section of shoes that resembled some sort of athletic shoe, and then look for the biggest pair.  Typically they were 9’s.  A couple places had 10’s.  During the squeeze in process, little plastic bags are used in place of socks.  I just kept saying Necesito Mas Grande.

Here’s what else goes down in the shops.  When they hand you the shoes, after getting them off the wall with one of those hook-poles, you have to do the rest.  You have to remove the shoe stuffing.  You have to refigure the lace set up.  They just stand there and watch.  I could typically size it up before having to put my foot in to determine whether or not it was going to fit.  I went to a dozen or so shops. 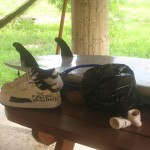 I sent the delightful British couple to the roof to ask the Oregon clowns if they were planning to leave their room ASAP.  I was done dealing with them.  They seemed cool at first glance.  It’s more the spot in the heart that Californians have for the Ore Gawn folk.  I wouldn’t even know why.  For me it was more refreshing to hear Oregon than Brazil, Australia, or Israel etc. “Oh Nice. I’m Aaron and I’m from Santa Cruz.  Bummer about your ear.  Give me a second and I will join you guys up top.”

I began having early doubts about jackass.  It took him but five minutes to start playing the divorce card.  The divorce had been final eight months ago.  His wife left him.  “My wife and I went to a counselor and the only thing she could say against me was that I was too nice a guy.”  I lowered my sunglasses, nodded a lot, and wondered how small his penis really was.  At first, he wasn’t too pathetic.  But he just went on & on & on.  We started to talk about hotel rates.  I smelled a rat.

Victims look for enablers, so naturally he turned to me.  He wanted me to enable him to get exactly what he had no idea whether he wanted or not.

So the original guy I met downstairs was not really in the picture.  Both his ears were fucked up.  Couldn’t really hear. Couldn’t surf.  He was looking at surgery back in the US.  He was bummin.  And he got real sick too.  Puerto is not a good place to not be at one’s best.  I’ve yet to go there.  So he was down and out.  Big Jim brought him a papaya once.  I did my best to pass along what it is I pass along.  It’s a shtick(le) of Love, Athletics, and Dry Sense.  They didn’t know how to buy into it.

But the leader of this victim duo was looking for something that wasn’t there out of me.  He didn’t trust me.  He wasn’t respecting me.  So what did I do to with Baldy from Oregon??  Not a damn thing.  I performed a double reverse takeaway and it worked to a T.  I lined up the Brits to apply the needed force.  When Homie asked me if they could leave several of their boards at the hotel while they travelled south, I said, “You’re welcome to ask the Big Man should you dare”.  Adios & Poof..

I was given a couple of pairs of used sneaks before leaving the States.  I was thrilled because I was completely out of shoes. Not something I would be using everyday, but they would come in handy on the tennis and basketball courts, as well as other times when flip flops or bare feet would make for a bad play.  I think they were both Nike.  They appeared to be in fine shape.  Supposedly hadn’t been worn in 15 years.   I couldn’t say enough about these two fine pair of sneakers.

I wore the high tops to the airport.  I packed the cross trainers.

On the way to the airport, we stopped in for a beer in downtown Los Gatos. (Pronounced Loss Gattis)  It was 3:30pm on a Monday. By 4pm on that Monday, my right Nike hightop shoe exploded and then disintegrated.  I barely tapped it on the bar’s foot stool, and I promise you that half my shoe disappeared right from under me.  I looked around for any remaining parts.  Fine powdery dust and pieces of weathered rubber were all I could rummage.  I soft pedaled out of there.

I retrieved the cross trainers out of my suitcase and put them on before arriving at San Jose International.  It was 5:15pm.  I quietly stood in line at the cancer causing scanning device(s).  When i took off my cross trainers, my left one blew to bits.  White dust everywhere.  You have got to be kidding!  I swept my shoe(s) into the grey bucket and took my lumps during the MRI.  Alaska Air gave me clear packing tape.  I left a white trail of debris in three airports on three airplanes.

We sat in my white van parked right across the street from the airport runway.  We ate In n’ Out and watched the planes land.  I was nervous.  Bones kept face down on her burger to hide the tears.  I made sure for the 100th time that she wouldn’t forget to start my van from time to time.  I took a pill.

At 5:15pm, I pulled up to International Departures.  For the first time ever, I used the curbside baggage handler.  It wasn’t so much that I had a lot of baggage, rather what I had.  I had four pieces all said.  My carry on and three others.  We said our goodbyes and made it quick.  She drove away.

They wanted $50 for the longboard.  $50 for the piano.  And $20 for the suitcase, providing I could remove two pounds worth of stuff to make weight.  I took out Lily, Rosemary, and the Jack of Hearts.  I gave the curbside handler a ten spot.  He smiled, called me Sir, and carted my lifeline down the way.

I happened to notice my keyboard was face down on the side w/ masking tape that said This Side Up.  The pill was kicking in which musically shifted any anger or anxiety into the All Good mode.  When the piano arrived in Puerto, there was no masking tape left.  Could have used another pill.