I’ve been playing lots of chess with my Jewish friend Jon Silver. The kind of Jew with lots of tattoos.  He’s in his early 50’s.  He was born in the same country as my brother and sister.  That would be California.  In the early to mid 70’s, when I was one of the fastest age group swimmers in all of The OC, Jon Silver was too.  During that period of his life in California, he was in the Mission Viejo area.  Too trippy.  That meant he was swimming for The Nadadores, coached by Mark Schubert.  And rubbing elbows with Olympic Gold Medalists Brian Goodell and Shirley Babashoff.  And closer to home, that meant he was competing against the legendary Vassallo Brothers,(Jesse & Vicente) as I was regularly getting lit up by their eight year old prodigy brother named Salvadore.  Jon opted out of swimming to pursue elite level H20 Polo, and opted out of Water Polo to pursue a career in riding Nasty Waves at The Mexican Pipeline.  He’s been in Puerto for 20+ years.

Of course I wanted pictures and stories.  He didn’t have swarms of pics from back in his day, but he did have a few.  One that said it all though.  In 2003, from a half mile away, Woody Woodworth took the pic of a 44 year old Jon Silver from the rooftop of The Santa Fe Hotel and Restaurant on a day that lured only a small handful of takers.  Coco Nogales was one of them.  Jon was riding a 10’6” and it was freaking giant.  I can’t begin to tell you how life and death it really is out there on XXL days.  He filled me in on many of his life and death oceanic moments.  He comes across as someone who has spent a good amount of time over the course of his waterman’s life, desperately trying to get that critical breath of air.  Gnarly is right.  He has an eighteen year old son named Aaron, who is currently in The States, perhaps trying to get into the Coast Guard. His eleven year old beautiful daughter named Kirra lives in Puerto Escondido and shares time with Jon and her mother. 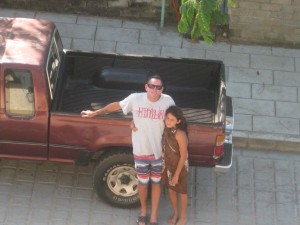