The kid with the cast got off at The Crucero.  A woman appeared, and handed the driver an order of tacos.  An old lady with a cane and a basket full of orange flowers slowly made her way into the back seat.  I stayed focused and memorized my line.

The perfume and cologne combinations were working perfectly.  Somebody in back spoke on what was probably a refurbished Iphone3.  A ton of everything goes down in the morning hours, and this morning was no different.  Action and Energy were peaking.  The sun low.  The hope high.  By 1pm, it’s usually time to duck & cover.

Five minutes down the way, the driver pulled over for The XL Woman, and her pregnant friend, who also was carrying a toddler.  I had experience making this kind of split decision, so I quickly ran the scenarios and scooted over.  As I figured, the pregnant lady with the little one got in back, and Queen Latifah squeezed in the front seat with me.  My left kneecap was directly in line with second gear.

No more than 50 feet into my ride, he stopped for a young mother with two kids.  One kid she held in her arms, the other was a uniformed kid with gel keeping every hair in place.  They were walking to school.  The five year old conversed with the driver as if they were related somehow.  It was pretty cute.  At the top of the hill, the driver stopped in front of the schoolyard and all three got out.  They paid nothing for the lift.  One other young man got in.  He had a cast on his left arm.

Back to Red.  So I jump in the front and say Buen Dia to the driver and the person in back.  It was 7:45am.  The driver had the radio on loud.  A little bit about the driver for what it was worth to me.  He looked just like Larry Bird.  But with black hair and dark skin.  Unlike Bird, both his thumb & pinky nails on both his hands were an inch long.  Creeepy!  His reason for doing this seemed like none of my business.  Jesus trinkets dangled throughout the dashboard arena.  The Red Taxi has a playlist of horn sounds; Each sound has a different meaning.  Pay attention!

The Red Taxi sounded.  I looked back and gestured Yes.  I did a quick survey and hopped in front.  I am new to The Red Taxi system this year.  In the past, when the time came for me to hail a cab, it was always The Dark Green kind.  The Dark Green Taxis will personally drive you just about anywhere around town for about $2.  Anything you need to take with you can either be crammed in, tied down, or hung out a window.  You can bring your pet into this taxi.  You can bring a bag of cement in this taxi.   I hear that if you go directly to the morgue or cemetery, you can bring a dead body in this taxi.  It’s basically your automobile for the taking. 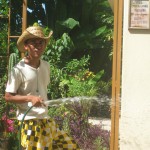 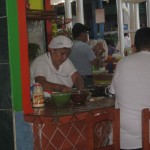 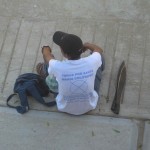