All winter long, the water has been real warm.  Not Cabo warm, because that would be cold.  Not Puerta Vallarta warm, because that too would be cold.  I’m talking about 82 degree temperatures in the dead of winter.  Pretty Nice.  The surf has unfortunately, by Puerto’s standards, been less than desirable.  And it’s the small, less than desirable surf that can actually be more dangerous if you can believe that.  Any lifeguard around here will say that most of the accidents and surfing mishaps at Zicatela occur in small, junky surf.

Michigan Mike hates it when it’s small.  Just fucking hates it.  Always bitching about it too.  “I should’ve stayed in bed,” he’s always saying.  He’s a big boy.  He rides a big, heavily glassed board with glassed in fins.  His strength is that he isn’t afraid to Go.  Gotta give him props for that.  I bumped into him eating breakfast at my secret spot on the highway behind the five mature ficus trees.  He lifted up his shirt to show me the fin gashes on his back.  They weren’t perfect slashes that warranted stitches or anything like that.  These were heavy impact contact between (his)back and (his)board.  He said his board is in the shop because two of the three fins had been snapped off.  He was pissed.

On the brighter side of All Things Ocean, not only has the water been warm all winter, but it’s also been quite clear as well.  Especially this past two weeks.  And the bird life knows it.  Boy do they know it.  Especially The Pelican.  Puerto happens to be a pelican hot spot in the winter.  Especially at La Punta where the shallows are littered with fish that range in size from one inch to one foot.  Millions upon Hundreds of them.  So The Big Birds of the sky fly in these enormous, rotating echelons, combing the shoreline with needlepoint precision.  Flying High.  Flying Low.  Huge and Healthy.  Maybe they are Hungry.  Maybe they are full.  Either way is Win-Win.

These Giant V formations in the air are quite the spectacle.  I saw one echelon with over 100 birds all told.  I began wondering whether or not every bird takes its turn at the front, OR maybe just the powerhouse, mature birds do the great majority of the pulling.  Lots to the hierarchy I’d imagine.  Pelican Omerta you can be sure.  I would bet the answer can be found on the internet.  Whatever the answer, the pelican is just downright impressive.  Pelicans are not like any of their ocean contemporaries.  You would Never see a pelican digging through trash at Trader Joes or Burger King.  That’s Seagull work.  Pelicans eat strictly fish.  They don’t need any free handouts.

I was running the beach towards La Punta yesterday when I came across three living Pelicans standing on the shore.  My initial thought was that something was terribly wrong.  Pretty out of character for a Pelican to stand on the sand and rest.  Pelicans rest on jagged rocks covered with pelican shit.  Typically at or near a spot called Pelican Point.  If a pelican isn’t resting on Pelican Point, it will rest in the ocean itself, much like a duck would do on a lake or a river.

So here stood these pelicans on the warm sand near the shoreline.  Standing pretty stoically.  And it just wasn’t right.  No more than a half hour later, on my return from La Punta, all three pelicans were dead in the sand.  Big Jim would claim Red Tide.  Not me.  I wondered how much time they spent pulling their weight at the front.  I knew one of the lifeguards would have a huge hole dug by sunset.  RIP. 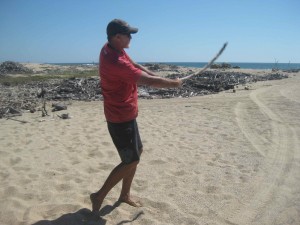 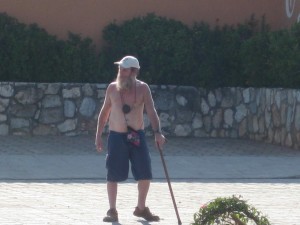