At 7:31am, the very next morning, I sat poll position again at the Breakfast Buffet.  At 8am I met Irene over at the Cafe/Internet Establishment.  This is also where the Van Station had a set up.  Irene was not only there when I got there, she had purchased my ticket.  And she got me a front seat.  Impressive.  I paid her back.  We had another sit down over another cup of coffee.  She was eating a carrot.  Irene promised me that she too would take the 9am van, but not until the coming Monday morning.  She asked to remain in San Jose Del Pacifico a few more days to embrace the full moon affect.  I granted her that notion.  I promised her that a personal driver would be at the Station in Pochutla at Noon to pick her up and drive her to Puerto.  I gave her my remaining 900 pesos and told her it was a signing bonus.  She was all smiles.  I was gone. 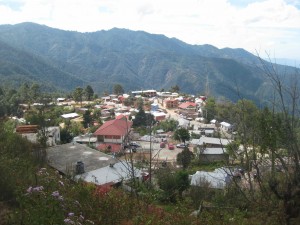