Word somehow got out that I was in the market for an Igloo.  You know, a cooler.  In my case a fridge.  A dime a dozen where you live, but a coveted money maker here in the tropical frontier.  Expensive buggers so I have found.  I’ve come to admire them in a whole new light actually.  I can’t imagine how many perfectly good Igloos, you know, coolers, are going unused and unwanted in the USA.  You would never, and I mean ever, spot a cooler going unused here in Puerto Escondido.  No way Jose.

He drove up beside me in his 1982 Ford F250.  The windshield was so cracked that you could barely see through it.  This beater wouldn’t last 15 miles in The States before being given a fixit ticket or impounded.  He said he needed a favor.  I had a full, hot coffee in my hand.  His dog and daughter were both in the front seat.  He told me to get in anyway.  He said he was low on funds and was looking to “sublet his Cooler”  The cobbled road that led us to this cooler was bumpy.  I protected my coffee.

There it was.  I was told that this Igloo has seen 20+ years in Puerto.  Used for weeks upon months at the most secret surf spots, under the most gnarly conditions imaginable.  He then went into a story about a two week trip back in the 90’s to Barra de  la Cruz.  Blocks of Ice.  1000’s of beers.  Hot Dogs.  Burgers.  The whole 9.  I was like “Yeah Yeah, how much?”  I got the ‘You’d be doing me a big favor’ spiel one last time, and then he said 800p.  It was a fair price, so I paid it.  Included delivery. 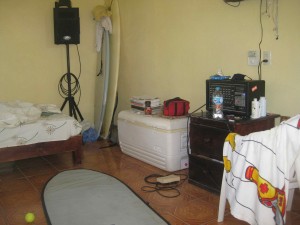 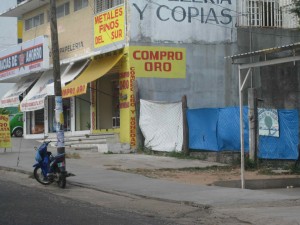