I woke up to an email from Edwin saying that my racquets were ready.  Both my tennis racquets were in the shop getting restrung.  I brought a second racquet down with me this trip because I had broken a string on my original racquet.  The strings on the second racquet lasted a couple of sets before breaking themselves.

To save 5p, I walked over to Edwin’s shop.  His shop really isn’t a shop in so much his house.  I was glad to finally meet the guy because I have been admiring his surf photography for years.  If you ever see a surfing shot of Puerto Escondido in any of the mags, or Surfline etc., 9 times out of 10 times, Edwin Morales took the shot.

He travels the globe.  He is beloved in Puerto Escondido.  As far as The Mexican Pipeline goes, he has seen it all through the lens.  He also happens to be The Guy in town that strings tennis racquets.  I opted for nylon.  He wanted 300p for both racquets.  “We should play sometime, I have access to a private court,” he said. 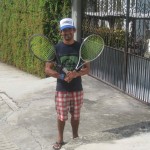