This is what was up on this particular day.  Nothing premeditated about it, which would seem obvious.  It’s just how it all went.  I had heard about a place that sells blocks of ice, and apparently I wanted one.  A half block actually.  Media Barra de Hielo.  But all one word.  And said very fast.  That’s what I needed, and I decided to find it via bicycle.  Thinking ahead, I grabbed a backpack, and both plastic-zippered thingies that protected the two new pillows that I had purchased years back.  These thingies, when not being used to transport a half block of ice, slip perfectly over my Peavy speakers, when not in use.  Basically US landfill.  So I folded up both of those, put them in my backpack, and soft pedaled off on my piece of shit bicycle in search of a half block of ice.

It was midday, with some cloud cover.  I knew about where to go, and took the back way to avoid too much time spent on the highway.  This meant a lot of soft pedaling up steep cobbled roads and the like.  I had to stop into a ModeloRama for a sixty cent ice cold Corona, but more importantly, to hang out inside the ModeloRama and soak in the AC.  You have to drink the beer there anyway so that you can return the bottle.  Might as well spend that time inside a cold room.  Wouldn’t you agree?  Anyway, I did ultimately find the place I was looking for.  Pretty cool spot.  Pun.  I rode up to a couple of hombres who looked pretty cool.  Pun.  I was soaking wet.  Ice was everywhere.  I had flashbacks of my days w/ Champion Nutrition.  Couldn’t tell you why though.

“Media Barra Por Fa”, I said.  “Where you gonna put it Jackass?”  Well I told them I was first gonna put it in this thingie, and then that thingie, and then in my backpack.  They both laughed, and If I had any idea what they told me, I would have known that they were saying that I needed a Quartito and to go pay the lady over there, and come back with your receipt and we will have the quarter block ready.  So that’s what I did.  And surprisingly, that’s what they did too.  Being the hero that apparently I already was in their eyes, I said a couple outlandish things and soft pedaled off with a quarter block of ice on my back.  First time for me.  Despite being that additional 20 kilos to muscle around on a piece of shit bicycle, I must say the freezing cold felt nice on my back.

I stopped by my favorite dude that sells coconut water out of his red van.  That’s where I learned what the word heavy was in spanish.  Because that is how the ice felt on my back.  Pinche Pesado!  For the first time EVER, my guy asked if I wanted Dulce or Simple.  Well Dulce is the way to go around here if you ask me.  It’s loaded in sugar, and ICE cold.  But I told him Simple just to go opposites.  That would be straight coconut water.  Still super cold.  He makes it in advance and it’s sold out of those giant plastic chingaderas.  But anyway…since I’ve become addicted to his Dulce, the simple wasn’t cutting it for me.  So he told me to slam half of it, and then he will fill it again with half Dulce.  I soft pedaled off, one handed, drinking coconut water with ice on my back. 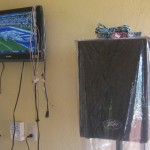 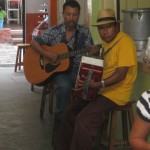 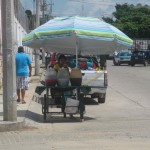