The next morning I stuffed my limited units of warm clothes into a small Rip Curl backpack, grabbed 2000 pesos, and walked across Hwy 200.  I stood in the parking lot of La Vaca Loca.  It’s not really a parking lot, so much as an area where taxi drivers drop off and pick up men between 8pm and 5am.  Women don’t go to La Vaca Loca unless they work there.  But these women get dropped off and picked up by their moms.

Within 10 minutes, I had hopped on the Extra Economy Bus headed south to Pochutla.  Or so it appeared.  The bus was pretty packed.   I spotted an empty seat near the very back.  Or so it appeared.  God I hate the back.  I never should have got on, but I was already committed, and all eyes were on me as usual.  So I walked down the aisle to that back seat only to realize that a tiny old indian lady was already in my empty seat sleeping.  I just stood there collecting germs and getting fidgety.

Apparently, Thankfully, and Miraculously, one of the treadless rear tires must have had a detectable leak.  I certainly didn’t notice it, and I didn’t actually here the driver say anything.  Instead, the rear door just swung open onto my not so funny bone, and I just jumped out without wondering whether that was protocol.   That’s when I heard the hissing sound.  That’s also when I found myself in a Circle Jerk with fifty or so Indians standing in La Vaca Loca parking lot.  I’ve seen this movie.  I knew the outcome to this punchline, and this dog don’t hunt.

The sun was blazing hot.  I crossed back over the highway and hailed a collectivo heading the opposite direction.  As it was pulling away, I looked back over to the crowd of people waiting in front of La Vaca Loca.  The Snow Cone Guy had already appeared.  Or maybe it was the Ice Cream Guy.  Whichever Guy it was, he was probably related to the Bus Driver Guy.  It’s funny shit.  I rode the collectivo about a mile up the Hwy and jumped off at the entrance to The Adoquin.  My timing was startling.  Just like I knew it might be.  It was 11:05am on Christmas Morning, and I was now on an Economy Luxury Bus headed towards Huatulco, knowing from experience that I would be able to get off in Pochutla, or anywhere else for that matter.   For only the second time in my career here in PE, experience was paying off for White Guy.

The thrill of being Tone Loc was short lived.  Once in Pochutla, I became the same old Green-Assed, Tender Foot that I usually am.  It was 12:30pm, and it was now good & hot.  And town felt dirty.  Dirtier than Puerto.  And the smell of exhaust was certain.  A gas mask would have been nice.   I was sure not to touch anything, because I can be a germ freak when I want.  And I wanted to be one now.  And so I was.

I knew Pochutla was a tropical hub town.  A town with a feverish rip tide.  Of coming and going.  Of this and that.  Of Yes and No.  Of Ebb and Flow.  Of Mice and Men.  I began to sense the sound that confusion makes.  And there I was.  And honestly, it’s no place to be.  Speaking of no place to be, have I mentioned The Pochutla Jail?  Can’t forget about the Pochutla Jail.  The biggest prison around.  I hear there is a bar in this jail.  I heard through the made-up grapevine that if an inmate has the money, he or she can stay piss drunk all day.

Regrettably, I had decided to wear my tennis shoes with socks to save room in the backpack for my other clothes.  Again, I had to bring a lot of clothes because San JoseDel Pacifico is at altitude.  9000 feet Mas o Menos.  And it’s winter time.  Although you wouldn’t know it if you were standing in my non-breathable shoes.  So I had my non breathable nylon shoes on, and I’m really starting to Schvitz.  I didn’t want to change back into my flip flops for fear of germs.  I bought an ice cold 32oz Cucumber & Lime Water in a Styrofoam Cup, and slipped myself into some shade on the east side of a three story building.  Two very well played moves on my part.

Some guy began yelling something at me.  He was looking right at me but motioning for some backpackers.  Or maybe he was looking right at the backpackers and motioning for me.  It sounded like he was shouting Vas A Nadar.  I walked across the street because that is what the water lady told me to do.  Unfortunately for me, this is kind of where Yelling Guy was located.  And he was just yelling random shit.  I wasn’t quite sure who he was affiliated with.  Again, most of it sounded like Vas A Nadar.  Since I was going high into the mountains, I felt that I didn’t have to pay attention to Yelling Guy.  I bought a 75 peso seat on a 14 passenger van that was headed to Oaxaca at 1:15pm.  I sat patiently waiting for my van.  Thank God I was only going to have to endure half of the six hour ordeal.  The winding road from Pochutla to San Jose DP is only 80 kilometers, but I had heard it’s a real son of a bitch. 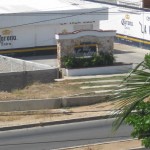 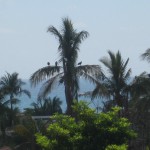 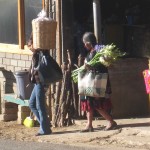