On Saturday Night, December 10, 2011, I coordinated a party for thirty people on the roof at Casa Agua Azul.  It was our(my) very first attempt at an event such as this since making the roof of the hotel safe enough to host an event such as this.  A pretty young lady named Madison was turning 21.  I did everything in my power to make it the best night of her entire life.  Damn near killed me!  To be responsible at any level down here is nothing short of miraculous.  You try it!  Anyhoot, I hired The Legend to make fifty, Five Oh, of his famous Puerto Burgers.  I put out an organic spread of beautifully manicured vegetables and various dips and salsas.  I served ICE cold Coronas.  There were twinkly white lights.  There was a Pinata.  We had a cake.  I was supposed to play piano for the first hour, but haired out.  The birthday girl created a play list on her Ipod, and I pumped the volume through my speakers.  The party began at sunset and it shut down at midnight.  As I faded into a tired oblivion, the kids took their party down to the playa. 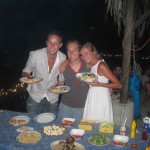 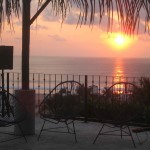 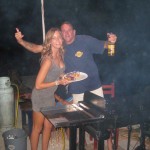